Who Can Top Negan?

the guy who will top negan is... eugene...rosita dies in all out war and after it's all over eugene continues to produce rounds for the factions, he mourns the loss of rosita and grows lonely by himself in the ammo factory and eventually goes insane, he begins building some crazy giant machine with guns mounted on it and when it's done he goes on a rampage and destroys the hilltop. intense...


oh and somewhere in the mix he resurrects abraham's corpse for evil bidings.

Who can top Negan? The Governor. Or Robot Govenor 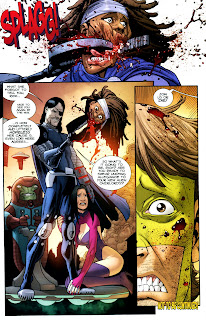 Does anyone have a larger copy of this image? I can't find this anywhere? What is it?

Nevermind... it seems that it is an issue 75 bonus, non-canon ending. Sadly I like this Lori a lot better, I'm a pig.

personally I find Negan to be a shitty antagonist. I wish he'd hurry up and die and the story go on so I could become as interested in this story as I was a few years ago. I still love this story, I just don't like Negan. He isn't scary, he's cheesy, redundant, and just too silly. I can't take him seriously.

there are plenty of other sorts of new enemies we could see that top it. How about a true clinical sociopath with some wits? someone who didnt go crazy or stop caring because of the outbreak.. but someone who even in the old world.never cared about anyone or anything but their own good because that's all they're capable of? We see all these people who are scary because of what this outbreak turned them into, but what if we saw someone who was largely unphased by the outbreak because it just never got to them? I think that could make for an interesting character.

But really, how about a break from bad guys? I'd love to see some primary threat again from the outbreak situation instead of humans. People say that Rick and co are too adapted for this, but I feel like a good writer could develop a situation where we can have a few arcs where nature is the primary threat again.

I think I know where this is going. Who can top Negan indeed?

I liked Negan initially but he is losing his mojo every issue it seems. Now he just seems like a bully that doesn't realize he can't just push everyone around in the sandbox.

Later down the line I think he'll be just an afterthought. I'd like to see something that they have absolutely no control over, something that will cause force them to adapt even more to this changed world.

I liked Negan initially but he is losing his mojo every issue it seems. Now he just seems like a bully that doesn't realize he can't just push everyone around in the sandbox.

Later down the line I think he'll be just an afterthought. I'd like to see something that they have absolutely no control over, something that will cause force them to adapt even more to this changed world.

I think the only way ill come to like Negan as a villain is when he kills more people, right now he is acting like a bully that is just toying with Rick.

I think the only way ill come to like Negan as a villain is when he kills more people, right now he is acting like a bully that is just toying with Rick.

I get the impression they are saving a lot of deaths for the all out war. I feel like Negan might top the Governor with the number of people he kills during the war. He was keeping people alive so they could gather supplies for him, but now that war is declared, I don't think he is going to hold back anymore.

Well, Ezekiel has a tiger.

The twist is that it's a man in a tiger suit.

It wouldn't be hard. I think it would be hilarious if some woman who needed help got into AZS and as rick introduced himself to her, she just shoots him right in the face. Instead of killing her I see the group take her in for questioning, to see who sent her and who her leader is. Then she could just simply reply I'm the leader of my own group and I'm tired of these men fucking things up with of their egos. Later you'll find out she was watching all the groups and the war and just decided people needed to go and rick was one of them.

People would hate this idea it's horrible I know and it would turn them away completely. I just think it would be funny that's all....besides no female baddie yet kind of sad...well not like negan or governor anyways.

An Uncle Sam character, maybe he even calls himself that. A former general that leads the remnants of the U.S. government. But he leads like a barbarian despot and takes pleasure in the ancient barbaric code. Could possibly even offer human sacrifice.

I can't see any single villain topping Negan. He's the perfect enemy for this type of world, and he is leaps and bounds more entertaining than The Governor. The cursing, the jokes, the brutality that goes on and off like a light switch... Kirkman hit a home run w/ this character. I honestly don't understand why people seem to think he's unoriginal or boring.....

I could envision a cooler/better THREAT for the ASZ survivors to face. Who knows, the ZA world is probably full of paramilitary groups similar to the Saviors - no doubt there are other groups that would prove just as dangerous and formidable..... but there can be only one leader like Negan. He's a diamond in the rough.

I don't think this is gooing to kill Negs... I think he may be sticking around

I think that happens in Rise of The Governor.

whoever it is it should be a female this time

Negan could possibly be the best Villan for the walking dead and may be around for a while, he may loose the war, Rick may loose the war. that would be an interesting turn of events, if Rick was to loose this war and end up on the run... That would be some story building there!

How about some sort of military scientist of some sort who has control of a nuclear weapon... the whole threat to really end the world as a villian??

I agree with a previous poster that the next big villain should be female. The governor is still the ultimate villain in the walking dead universe. Negan is good but will half to cause more damage to take the title from the governor.

I think the next villain won't be an actual person at first, but a psychological one. For example, people could start being found murdered, but nobody would know who. I know it's very cliche but I think it could work well if another group of survivors is introduced first.

But I definitely expect loads of internal conflict in the next big arc, having another villain introduced right after this one would be too redundant.

Carl or Rick becoming a villain could top Negan IMO.