Actor Chandler Riggs, who plays Carl Grimes on AMC's The Walking Dead, talks about why he's not allowed to go to the cast's "death dinners" and his most gut-wrenching scene this year.
Q: Now that Madison Lintz (Sophia) is gone, what's it like to be the only kid on set ?
A: Luckily, some of the actors act like kids, like Steven Yuen and Norman Reedus. So I hang out with them a lot. They're really fun guys.
Q: Carl played a big part in Lori's death this season. Was the material in that scene at all difficult for you to process?
A: I read the script and it was just horrifying. The whole scene felt like it took a week to shoot. It was dreadful, but you just gotta get over it and get on with it. There was no way to keep those days bright and happy.
Q: What's it been like acting on the show without Sarah Wayne Callies, your on-screen mother, and Jon Bernthal, who was a bit like a second father for Carl?
A: It's been hard having them gone -- both of them -- but I learned from them in the time I did have with them. When I signed on I knew that they would eventually get killed off, because I'd read the comics. Every now and then Sarah's on the set again. It's been cool to see her. Usually they have the death dinners that are at bars, so I can't go! I don't think [I've been to any.]
Q: You told us last year that because of Georgia's laws you can't hold a working gun on-set. This season Carl gets to use a weapon more. Has that been a welcome shift?

Cool! Thanks for posting.

I just love Carl this year.

Seriously, that's so rude. Regardless of how people feel about the character, Sweetsister didn't even post an opinion about anything; she posted an interview with one of the actors on the show. Why the hell would you give negative points for that?

^^ agree with you guys.
Chandler Riggs seemed very cool in this interview and is very well spoken.
Thanks for posting!

Yeah I mean I couldn't really see him as the comic book counterpart at the beginning but now my opinion has changed completely. I mean sure sometimes he doesn't think things through and desperately wants to be seen as man and go lone wolf but I like the change.

Thanks guys , I thought some folks would want to read it and those who diddnt, well they just wouldnt....ah well.......

Some people would down vote their own mother around here if she had a difference of opinion, it's ridiculous. Like Duke said, if someone doesn't like the character then more power to them, but Sweets isn't Carl. Now dance and stuff.

Yeah, some people gave Sweets down votes for posting the interview for some strange reason. It's all good, we voted her back up.

Carl's character annoys me sometimes too, but I like how he's evolving and I loved the interview... The actor sounds like a cool kid. I particularly loved the part about how Steven Yuen and Norman Reedus "act like kids", so he hangs out with them on set. Somehow, that's not hard to imagine.

Awesome interview. I see no reason why anybody would vote this post down, and it seems many of you agreed and voted her back up. Let's just move on and get back on topic here.

He read the comics before filming the show? What was he like 9 or 10 then? Interesting parenting decision...but a good interview even though i'm not a HUGE fan of the character i believe he does a very good job with what he has been given.

All the "Where's Carl?" gifs from the last two seasons were great but Carl has grown up and come into his own.
Taking names and kicking asses like a boss! 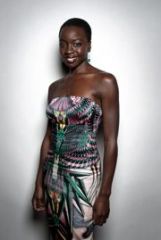 I liked how in the video insert they're interviewing Sarah Wayne Callis and she's talking about the C-section scene and she says everyone is looking down at her and just "horrified" and yet if you watch Chandler/Carl, he's got this grin on his face that is definitely not a look of horror. Heh...

Chandler is going to grow up into a good actor having this exposure to a lot of talent as he does the show, if he continues to pursue his acting career. It remains to be seen when he's 18. Hopefully he won't go the Corys route (Haim and Feldman) or the bad road that a lot of child actors have gone down.

Carl as the character has had definite life defining moments, being shot, seeing the man he (feels) responsible for get shot, the hectic pace along the road, starving, then his mother's death by his hand, his father's break-down and so forth. If he survives he's going to be just a BAMF adult.

Well in the case of ricks visions I'd say yes but some of the old actors/actresses visit the set to support the current cast. I would assume Sarah developed friendships with all of the cast members she's worked with so she may be back for support or flashbacks or a vision scene.