I'm slightly new to this forum and have enjoyed reading the posts of the intelligent people on the forum. So well Ive decided that I want to contribute more to the site so here is a little guessing game for you guys.

Who. Is. Next. Is a game Ive created where users will be put in a game where they will be rewarded points for correctly guessing which slightly important character will be next to go, the person with the most points at the end of Season 3 will be the winner (I have no prize so this is just for fun). I am aware that spoilers for the show are usually released slightly early so I have made some rules to combat that.

Rules
1. You do not gte points for guessing incorrectly (obviously). Here is the points system.

The first 3 people to correctly guess who will be next to go will get 3 points.

And the rest will get 1 point.

2. You can only predict the deaths of characters that are actually slightly important, have had some points E.G Choosing characters like Oscar is completely fine because he actually did stuff, or even Caeser because he has had a few lines, but correctly guessing that Shupert is going to die next won't get you any points, (This can change if a character gets more important). It's hard to draw the line sometimes but people who haven't had any lines certainy don't count.

3. You can only guess characters who have already appeared on the show and not ones that are set to appear in the next episode.

5. You cannot change your guess until the next episode has aired. 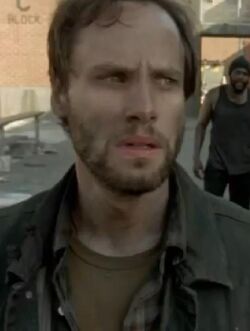 It looks like he's about to screw with Carl - and that can only go wrong. Even if he doesen't I do not see him lasting long.

I agree that Merle is as good as gone within the next few episodes.

Woodbury... A Charming Place to Live!

yeah but you will have to keep this up for the next no-episodes months!!

Don't worry I won't forget about it hopefully we can get a decent amount of users that will keep it alive until then.

Do you get extra points if you guess correctly and you've never read the comic?

I have to go with Merle first as he will truly be hated at the prison. Then possibly Allen for the possible Coup d'etat event that was hinted at in the sneak peek. I also think Miltons days are numbered as he is no longer needed by TG and as I don't see Milton turning into the Merle type and as TG seems to be going batsh?t crazy he may turn on Milton because in a way he couldn't save Penny either. Those are my picks.

Merle has way too much potential for drama after the cliffhanger. He should be lasting for quite a while. But I can't see Allen and Ben lasting for too long. I'll put in a vote for Ben just so that I can be the first

I think Allen will be next to die

I think Allen will be next to die.

Shupert will die next.

Judith , Beth , then Hershel same episode. I can just see Judith dying, Beth trying a second to late to save her and Hershel running up to save Beth thus causing his death. It eliminates all the dead weight and makes room for the three new characters. If Andrea doesn't grow a pair I will put her down for 4th to go, but I want to see what happens as she reconnects with the losties.

Judith (3rd) - I think the odds are stacked against her and Beth (2nd) will be involved at the same time - maybe holding/baby sitting Judith. Allen (1st) will go stir crazy.

daryl dies saving merle and merle escapes joining rick's group. biggest troll to the fans and i would love every second of it to finally shut all the fangirls up

Updated with more peoples guesses glad to see so many

Allen is next for sure!

No extra points for that I'm afraid but you get the awesome award !

Does anybody wanna help me make this an easier to understand game?