What are you're favorite comic endings in the walking dead series?

I used to read the trade paper books of walikng
dead up until issue. 96, which means I was a bi-yearly reader .

I've been month to month since then and I'm really enjoying the series even more (as well as a few of comics I've started pulling).

Now looking back at previous issues I'm wishing I was able to go back and experience the anticipation of back issues.

.So my question is for you long time readers, what are you're favorite comic book endings in the series?

How dies issue 48 end? And 49?
I think that those are pretty scary endings if my page count is correct.

I've got 48 endings with Carl alone with half dead rick full page carl screaming, "DAD!" That's a good scary ending. Rick is really sweating there, and Carl was already

Issue. 49 a page longer endings with. Double page?
I was just reading tbc 9: here we remain

issue 12 - Seeing the prison for the first time, a new beginning for the group, excitement of what comes next for readers, great cliffhanger.

Issue 48 - especially after the trauma of that issue, just rick and carl leaving a destroyed prison. Many dead, the group dispanded, amazing ending.

Issue 83 - Not the last panel but, Rick hacking Jessies hand off sacrificing her and Ron, Douglas killed, Carl shot it eye, epic.

Issue 100 - Glenn lying dead, the group on their knees in tears, shocked and broken. Negan just walking off with a wave and 'tata'.

"I can't wait till you see what I've done to your little boy!"

A lot of other issues had good endings, but the end of 48 was perfect.

Issue 89 had a hardcore ending

Do you have any idea who you're fucking with?

This is one of my all time favorite endings , just when they though they had found some place for the moment that is safe...........issue #8

This is one of my all time favorite endings , just when they though they had found some place for the moment that is safe...........issue #8

One of the best endings, indeed.

In Rise of the Governor, the origin of that sign is revealed.

One of the best endings, indeed.

In Rise of the Governor, the origin of that sign is revealed.

For me, this was a little bit cheesy, to be honest haha
The morning after a group arrives to the estates, the snow falls off the sign?

Many I like were already mentioned but here are some more...

I thought the sequence of Ezekiel recounting losing Shiva in Issue 118 was a great ending. I always thought the tiger was a bit much, but it was all worth it for me after seeing the lost battle while Ezekiel expresses the emotional impact felt over Shiva's loss.

Issue 111 with Negan "Clean this [a gutted Spencer] up before a kid sees it. And find out where this asshole lived. I want to play some pool."

Issue 63 with Dale laying before an open fire. "A Man's Gotta Eat."

Issue 55 with Glenn searching but looking in the wrong direction and Maggie hanging behind him. "Maggie?" 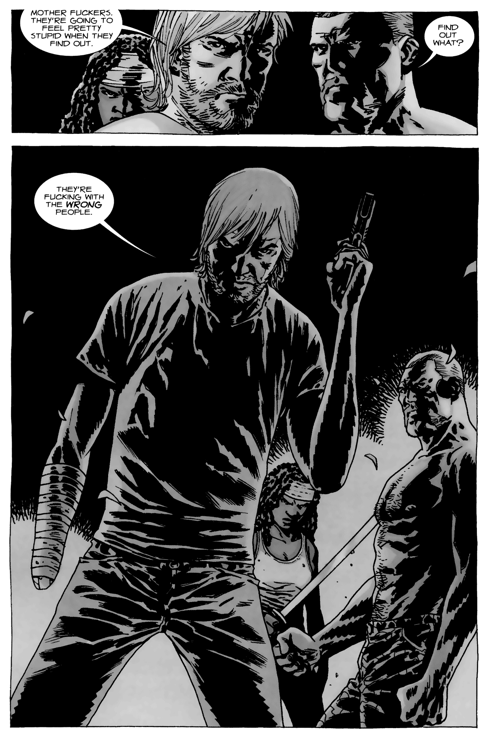