I did notice the birds in the titles at the beginning after reading this thread.

Perhaps they r carriers of the virus.

That could account for breakout in numerous areas almost simultaneously.

I'm not sure, but I think the crow was pecking at a dead animal. Crows and ravens are often used to symbolize death. They were called "corpse birds" in Europe, because they flocked to battlefields and scavenged the dead.

I think it was Brian Keene who wrote a series of novels with animal as well as human zombies. I started the first book, but the animal zombies seemed to make the plot silly and unworkable.


"Kiss your Mother goodnight, and remember that God saves."

Crows and ravens are often used to symbolize death. They were called "corpse birds" in Europe, because they flocked to battlefields and scavenged the dead.

Related tidbit: A group of crows is called a 'murder'.

Related tidbit: A group of crows is called a 'murder'.

Always thought that "A murder of crows" was a story about about a bunch of crows being taken out. LOL

We've seen
S4 spoiler:
Spoiler
pics/ previews with Michonne riding a horse.
We've seen a horse get eaten as well. So why haven't we ever seen a reaninmated horse? Will we ever see a zombie horse, like in the video game Undead Nightmare? (click photo below for bigger version). 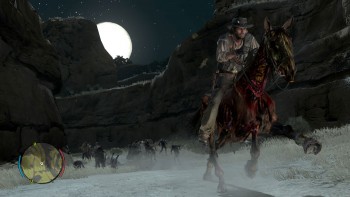 Shield yourself from those not bound to you by steel, for they are the blind. Aid them when you can, but lose not sight of yourself.

Kirkman confirmed (at least for the comic series) that bitten animals die but don't reanimate, so no zombie animals

Kirkman confirmed (at least for the comic series) that bitten animals die but don't reanimate, so no zombie animals

Same rule probably applies for the show then, I'm guessing.

The dead deer in season 1 didn't turn. Or the dead dog in the hermit's shack.

I don't know it would be cool to see undead animals, but that whole thing just opens up to much chaos.

It would be fun if animals were turned as well, cause there will be the risk of being attacked by zombie-mammals...

Zombie dogs, wolves, coyotes, squirrels, deer, horses, etc. I think Rick and company would be pretty much screwed if every animal also turned.

Agree way to overwhelming if the animals turned. Then you would have your basic, zombie rats, mice, squirrels, birds, groundhogs, lions, tigers and bears, etc. etc.