The Walking Dead Magazine Out Today 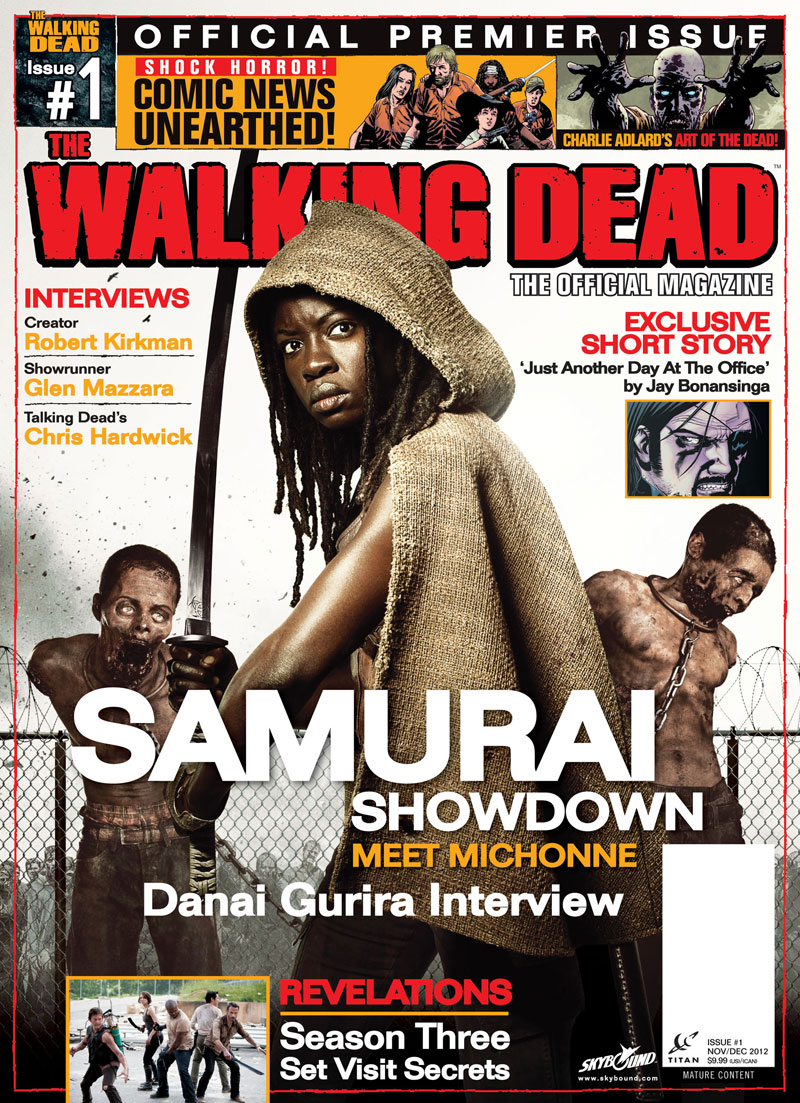 The first issue of The Walking Dead Magazine lands today, both in print and digital. Running at 100 pages, it offers an inside look into the AMC TV Series as well as the Skybound comic book. In the this issue, Robert Kirkman writes about what fans could expect from the coming months, as well as an interview with Danai Gurira, the actress who plays Michonne.

This 100-page issue features an inside look at the TV show, comics and everything in-between: The Walking Dead creator/writer Robert Kirkman reveals what’s coming up next on the TV show, which broke basic cable records again with the season three premiere, and how the shocking events of issue #100 of The Walking Dead Comic will affect Rick and our favorite survivors; an exclusive interview with Danai Gurira, who plays the iconic character “Michonne”; an exclusive prologue to the new Walking Dead book, The Road to Woodbury, about the rise of Philip Blake aka The Governor written by Jay Bonansinga and Robert Kirkman; behind-the-scenes set visit report; executive producer/showrunner Glen Mazzara tells us why he’s so excited about season three; plus, all the latest news, revelations and tips for fans of the entire The Walking Dead universe.

Discussing what fans can expect from the magazine, Robert Kirkman, creator/writer of The Walking Dead, says, “We’ll be talking about what’s coming up on the TV show, we’ll fill you in on what to expect from the comic and you’ll hear from all the talented people who work on all the various Walking Dead projects. This magazine is going to rock!”

The magazine will also be available to read on the iPad, Nook and Kindle Fire starting tomorrow, giving Walking Dead fans an exciting alternative to the print edition and a high quality digital reading experience. Just search ‘The Walking Dead Magazine’ on your device’s newsstand or app store.

The magazine is currently offering fans an exclusive FREE The Walking Dead T-Shirt (not available in stores) with new print subscriptions. For more information on this subscription offer and other offers in your territory, visit the magazine website, www.TitanMagazines.com/WalkingDead. Readers can also join the magazine on Twitter at www.Twitter.com/WalkingDeadMag and Facebook at www.Facebook.com/WalkingDeadMagazine to keep up to date with news and special offers and www.Skybound.com, the source for all news on The Walking Dead, Robert Kirkman and all Skybound titles.

The Walking Dead, The Official Magazine issue #1 will be available on newsstands and comic book stores in the U.S. on October 23, in the U.K. on November 8 and Australia & New Zealand on December 18. Digital editions will be available globally on the iPad, Nook and Kindle Fire from October 23.

For more information on The Walking Dead, The Official Magazine visit:
http://titanmagazine...e-walking-dead/

Dec 12 2012 01:57 AM
looks like too many spoilers in there for me. Though it looks awesome. I could though by old copies, and not spoil it for myself.